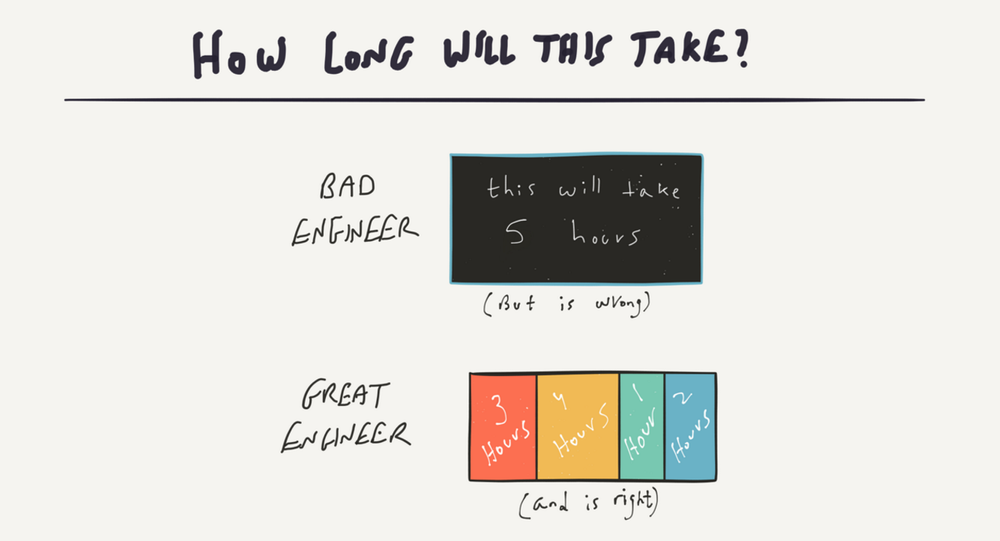 As a programmer, you are constantly being asked 'How long will it take'?

And you know, the situation is almost always like this:

You know Estimating is hard. Working with NO estimates is a pipe-dream. So it's sort of a necessary evil.

Here are the set of tips:

The Cone of Uncertainty:

The idea of "the cone" is that you start a project with high-level/low-accuracy estimates and your confidence and accuracy increase as you make progress on the project. For example:

Its kind of like shooting a target. Previous shots at estimation should tell you how off the mark you are, so that you can correct it.

One of my colleague (Gani Padela) shown an awesome video, which says

No good can come from a rushed job to meet a deadline.

Video explain us that we have to estimate in such manner so we equalize to Customer's expectations in relation to project delivery.

Advantages of Estimates For Developers

Unless they are working on a R&D project, don’t go into a feature with no clue whatsoever of how long it’s going to take to complete.

I’m sure that, if you’re a developer, you’re making estimates for yourself already. Of course these are not precise estimates, and you don’t need a complex process to produce them. It’s more a short reflexion based on your previous experiences solving similar problems than anything else. The result sounds like “this should take me a day or two” or “if I’m not done by the end of the week I’d be really surprised”.

It’s perfectly fine to do this: you don’t commit yourself, you don’t set a hard date. Now let’s see how your own quick estimates can be useful for the project.

Not Wasting Time
Sometimes a developer can see that a feature is not worth building because it would take too long. This is something product managers can’t know and are always happy to hear about.

Detecting Difficulties
Used correctly, estimates can help technical leads identify other developers struggling with a complex issue. This also prevents the very need for micromanagement or the “are you done yet” effect.

Finding Quick Wins
Estimates can help a developer find and communicate about quick wins for the project.

The Cost Of Estimates

Giving an estimate always costs time. It can go to a minute of reflexion to full fledged processes.

If the cost of estimating something gets too big compared to the scope of the feature, I don’t think it makes sense to be spending this time. For instance if you take 2 hours discussing whether a feature will take 4 hours or 6 hours, you are obviously wasting time.

Overall, I recommend not spending more than a few minutes on estimates. If you end up with a huge project, try to break it into smaller bits and estimate these instead of trying to deal with the whole thing.